We have a proven track record of translating vision into tangible outcomes, useful activities, and thoughtful materials; maintaining sincerity and avoiding rhetoric; creating and growing high-level networks; and exceeding communications and fundraising goals. Red Tomato is a member of the Mightier Network. 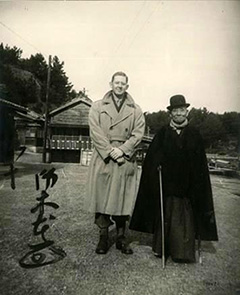 Philip A. Weisman, my mother’s father, lived for 90 years. He was a public health officer in the US Army of Occupation in Mie Ken, Japan, where he played a pivotal role in helping rebuild the prefecture’s bombed-out hospital and medical school. He built a friendship with Mikimoto, the inventor of the cultured pearl, on the foundation of chocolate.

He then returned to Dayton, Ohio, to my brilliant grandmother, Charna, and my mother, Cathy. After completing his Surgical Residency at the Mayo Clinic, he worked for 40 years as Dayton’s first Board-Certified Plastic and Reconstructive Surgeon starting in 1953. His office was full of sculptures and other artworks created by patients whose hands he had repaired.

He wrote copious articles, served on many boards, and was a member of numerous societies committed to causes of social good. He cared deeply about Rotary and its global public health efforts. He loved scuba diving, snorkeling, painting, and photography. He wrote profound letters — typed on his typewriter and lovingly illustrated with drawings — to every member of his family, and planned elaborate “dates” with each of us from babyhood to adulthood, making valiant efforts to understand our unique identities. He entertained me as a child by reciting poetry from memory — backwards and forwards. He filled meticulously organized files of all his children and grandchildren’s letters, artwork, and photos.

On his deathbed, he was reading the Wall Street Journal and re-reading Grapes of Wrath every day, with a magnifying glass, and still making jokes and radiating light — even when he could no longer see, hear, move, or speak clearly.